How are odours collected?

Odour measurement requires representative samples of the air to be drawn into a sample bag and rapidly transported to an odour laboratory for olfactometric testing. Sampling strategies and techniques depend on emission source characteristics.

Odours emit from various sources, such as stacks in an industrial process, aeration tanks in wastewater treatment plant, composting piles in a mushroom composting plant, chicken sheds on a poultry farm and cattle feedlots. Each type of source has special requirements for sampling and sample collection.

Point sources: Typically a point source will be a stack with a known flow rate such as a discharge stack from abattoir or a vent from a pig shed. It is important that the pattern of flow rate and odour concentration is estimated using an appropriate procedure. Where key factors are unknown, a study should be carried out to provide a good understanding of the gas flow and concentration fluctuation pattern on a daily basis, even in some cases, on monthly and yearly bases.

Odour samples are taken into Tedlar sampling bags loaded in a vacuum drum through clean Teflon tubing probes inserted into the stack at different points. The number of points required is determined by the dimensions at the point where the sample is taken. As a rule of thumb, the number of sampling points needed to average air velocity across a stack cross section can be used as a guide. The odour sample is collected using an odour sampling system as shown in Figure 1. A vacuum pump and a 12-Volt battery are built into the sampling drum as shown. A new and cleaned Tedlar bag is placed into the sealed sampling vessel. Air is then pumped out of the sampling drum by a battery operated pump creating a vacuum inside the drum. Sample air is drawn into the bag by the pressure difference between the inside and outside of the bag.

Area sources: Typically an area source will be a water or solid surface such as the water surface of a slurry storage tank or a cattle feedlot. A portable wind tunnel system can be used to determine specific odour emission rates. The principle of the wind tunnel system is that controlled air, filtered by activated carbon through a series of devices, forms a consistent flow over a defined liquid or solid surface. Convective mass transfer takes place above the surface as odour emission happens in the natural atmosphere. The odour emissions are then mixed with clean air and vented out of the hood. A proportion of the mixture is sucked into a Tedlar bag via Teflon tubing using the sampling vessel. The air velocity used inside the wind tunnel is 0.3 m/s. An isometric sketch of a portable wind tunnel system is shown at Figure 2. 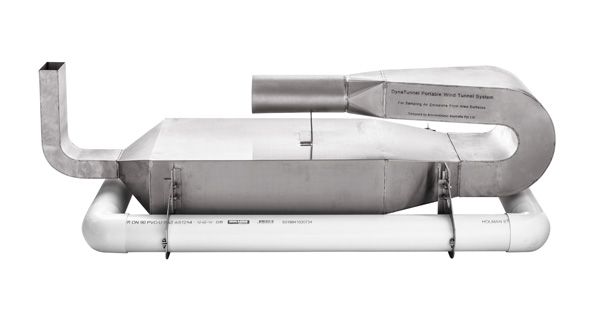 The Specific Odour Emission Rate (SOER) may be defined as the quantity (mass) of odour emitted per unit time from a unit surface area. The quantity of odour emitted is not determined directly by olfactometry but is calculated from the concentration of odour (as measured by olfactometry) which is then multiplied by the volume of air passing through the hood per unit time. The volume per unit time is calculated from the measured velocity through the wind tunnel that is then multiplied by the known cross sectional area of the wind tunnel.

The wind tunnel system is designed to replace the previously commonly used isolation chamber in the determination of odour emission from area sources.

Building sources: Typically building sources, such as chicken and pig sheds, have a number of openings. Prior to about ten years ago, little research was undertaken on the determination of odour emissions from buildings. For building sources, measurements of both odour concentration and air ventilation rate are required. The air ventilation rate from animal housing is dependent on operational conditions (e.g. opening or closure of side flaps or shutters), and ambient wind speed and direction.

For animal sheds, odour samples are normally taken from several points within a shed. Experience indicates that one composite sample is sufficient to represent a single shed at a particular time. Additional samples can be taken at different times of the day or week or to understand the fluctuation of the odour concentration levels within a day or a week. Similarly sampling may be carried out for different weeks during a growout cycle or for different seasons during a year or longer.

Fugitive sources: Typically fugitive sources including odour emissions from soil bed or biofilter surface. The emission normally has an outgoing or upward gas flow. In such cases, wind has less effect on the mass transfer process. It is important that the outlet concentration of a biofilter bed should not be diluted in a way that is unrepresentative of the real situation.